Your 2-day study tour of the Netherlands

Knowing some of my regular blog readers will be heading to the Netherlands for the Velo-City conference in Nijmegen in June, I thought I would share my thoughts on how you might spend one or two days gathering lessons to take home from the nation of bikes. (That’s if you don’t just want to ride for miles in the country being overcome by fumes in the polders.)

Before starting, let’s open our eyes. Let’s recognise that the Dutch aren’t as innovative when it comes to building for bikes as you will need to be if you imagine making cycling mainstream in your home city. Their city centres have always had a dearth of car parking. They don’t have sprawling car suburbs without decent access to trains. And they don’t have lots of people living on hills. They’ve been proactive with traffic engineering, but with their buildings the Dutch have only ever reacted to the “problem” of everyone cycling. That’s the bad news. The good news is that in the process of reacting to the problem of thousands of bikes arriving at train stations and schools, they are discovering lots of transferrable lessons that anticipate a future for many cities.
I’ve devised this itinerary to help you see beyond the seductive images of queues of cyclists leaving traffic lights near major roads. Those bottle necks are where bike planning has failed. Stopping to photograph them only shows you’re myopic. Let me help you see things in a more meaningful light. 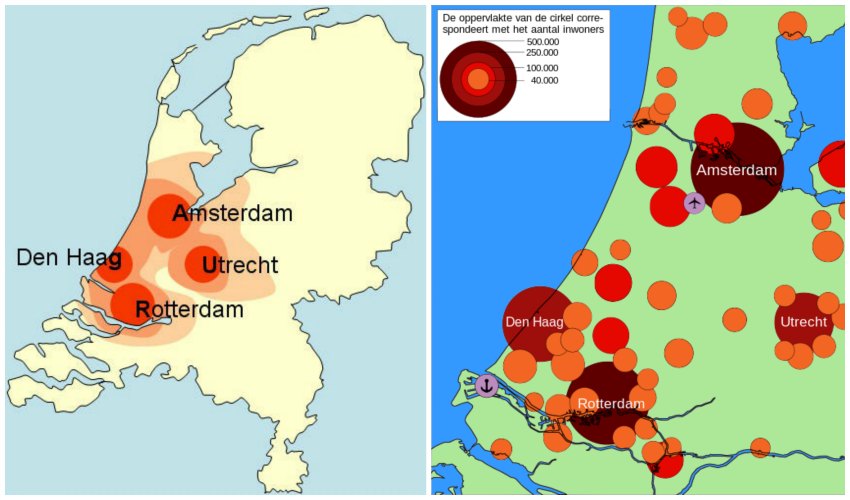 The first thing to note is that Amsterdam isn’t really a city. It’s a borough, separated from the other main boroughs of a conurbation known as the Randstad. Start your tour of this city of 7,000,000 people with a train trip to the Southern most borough, Rotterdam. I take my folding bike on the train, so am not fully clued up on other options. I believe that outside of peak times you can pay to take your own full size bike with you. See below for details about how locals use cheap hire bikes that belong to the rail company.

You have made it to Rotterdam with your bike. While you’re feeling energetic, take a ride to the Maastunnel (my video here). Not only is it a great piece of infrastructure but you can see how people, when they know how, can easily take bicycles on escalators—useful to know when designing in a city with level changes.
While you’re enjoying the bike infrastructure, keep in mind Rotterdam has the country’s lowest bike share, around 15 or 20 percent, depending on what study you read. I tell you so you’re aware that you could build bike paths like this in your city, and never reach 15%. Like your city, Rotterdam has car parking in the city centre and while ever that car parking is there, people will use it. Rotterdam’s bike infrastructure and building stock would need to exceed Dutch standards for the bike modal share to go any higher, while your city would require even more innovation—the kind flagged in my forthcoming book. Buy it! You’ll like it!

Ride Rotterdam’s perfect bike paths without anyone on them back to the centre and look for the unmistakable Cube House. I like it for the fact that you can ride a bike up the ramps that lead to private entries. My video here. That is the future of high density building if we really want people to cycle.
While in Rotterdam (one of the world’s great cities for contemporary architecture) you will want to see the new Market Hall. It’s an architectural wonder, an apartment building bent into a hall; unfortunately it is very mean to bikes and very friendly to cars.

Head back to Rotterdam Central station and look for the entry to the basement bike parking out front. This is a neat example of the national rail authority’s standard integrated transport approach to the first/last mile. Here’s how it works. If you lived in Rotterdam and were going to Utrecht, you would ride your own bike to Rotterdam station and take it straight down into a big bike parking station under the platforms. There, an attendant would give you a tag for your bike and a ticket to keep, both with the same bar code. You could leave your bike in Rotterdam for up to 24hrs for free while you went on the train to Utrecht. In Utrecht you would use your travel pass to rent a bike from the rail company for your time there. The cost is only around USD$4 per day. I would be suggesting this as your best means to visit all of these cities, but I don’t believe it’s available to foreigners. I wouldn’t know because I always go on the train with a Brompton.

Go down and see how it works. Note the smooth work flow, how a cyclist can enter, park their bike and walk to the train with the minimal deviation from their hurried course. Also note the capacity induced demand: the bike/rail combo is so inviting that a lot of people are now commuting intercity, particularly university students who can travel for free. As big as they are, all of these bike parking stations are virtually full—but then so are the university courses, so who can complain!

These stations are key to “the Randstad” (the conurbation of cities in the southern half of NL, with 7,000,000 people) functioning as one city. The regional strategy works because a huge surrounding area is seen as each train station’s bike-centric catchment and kept free of encumbrances to bicycle traffic—no-one wants to be struck at traffic lights on their bike, waiting for cars, when they’re worried about missing their train.
The return train ticket in your pocket for Amsterdam/Rotterdam will let you stop for a while in Utrecht, the country’s greatest pot of gold for those seeking lessons to take home about building for bikes. The first thing to note is the train station. Until Amsterdam station gets its enormous bike parking facilities that are now being planned, Utrecht Central station will have the largest such facility in the Netherlands, and therefore the world.

It’s a short ride from there to the newly built Oog in al School, that doubles as the approach to a bike bridge. My video here. It’s virtually in the town centre.

From there it’s a 10 minute ride to Utrecht university, where nearly all the new buildings are built to accommodate everyone arriving by bike. The best examples put bikes undercover and en route to the front door. They also feature windows overlooking the bike racks to deter bike thieves. I would especially recommend the Educatorium building by Rem Koolhaas, and the nearby faculty of science building by an old master of my profession, Herman Hertzberger. Here’s my brief blog post about Utrecht university and its bike friendly buildings.

Let’s say that was a day trip, and now you’re mooching around the canal district in Amsterdam before heading to bed. I’m not going to tell you where to find the best bottlenecks for your voyeuristic photos of crowds of people on bikes. There are acceptable places to be a voyeur in the red light district you found two seconds after you got into town.

The real lesson of the central canal district of Amsterdam is the predominance of intersections without any signage or traffic lights—its “naked intersections”. This is what you can have in a city where bikes are the predominant mode—in Amsterdam they represent 67% of all trips in the centre. They mean cyclists do not have to stop! The few sets of traffic lights in the city that you’re so desperate to see for the bicycle bottlenecks are where cycling is faltering. Where it is thriving  is where it cannot be seen from one viewpoint, and that is where it is free and dispersed. So give yourself time wandering around all the traffic-calmed streets, and let yourself stray from the canals.
It’s day two and your wits are refreshed. They would want to be because I would direct you to hell’s lowest level, the Hans Monderman-style shared space behind  Amsterdam Centraal station. You will find a four-way confluence of pedestrians and cyclists all crossing paths in a bottleneck that can be traced to poor planning elsewhere. While this is not something anyone wants for their city, it does show you that bike and pedestrian traffic still flows without traffic signals no matter how congested you make it. All you have to do is take cars out of the picture and traffic in your city will flow. See cctv footage of it action.

Head East along the river and make your way to The Nescio Bridge. It was designed by Wilkinson Eyre architects, who also designed the Gardens by the Bay project in Singapore. Both look like bird bones turned white in the sun. What I like about the Nescio Bridge, over say the Hovenring in Eindhoven, is it is not just an overpass where the main purpose is to preserve traffic flows underneath. You will see from its location that it was built to give cycling an advantage over driving for the residents of the growth district, IJburg. Aesthetically, I like to think that any suspension bridge with a curved deck has a rhythm of cables that echoes the arching and leaning dynamics of cycling. It’s a 15 minute bike ride to get there from the centre of town.

Between now and lunch I have two town planning lessons to share. The first is Bijlmer Oost, a post-war Corbusian style housing estate that filled up, almost as quickly as it was built, with immigrants attracted from the former Dutch colonies to do all the shit jobs for the privileged locals. Say nothing of Sinterklaas, got it? In theory, this should be the worst place on earth. If you ask me it’s quite cheery and architecturally lush.

From Africa, head West and look for office towers on the skyline. You’re heading to Zuidas, Amsterdam’s office park with 2000 sqm floor plates pitched to big corporate tenants like Google. What makes Zuidas stand apart from other edge cities (think Macquarie Park Sydney or La Defense Paris) is that it is spread out. When building for a bicycle borne population, there’s not the same pressure to put every office right next to the station, so while there is a clear cluster of those, there are also office towers scattered over a large area, with other functions between, chicken farms for example. That tossed salad of functions that Jane Jacobs called for in Death and Life of Great American Cities can be achieved precisely because people all cycle. It can never be achieved where everyone walks, as Jane Jacobs naively believed.

By now it is getting on in the afternoon and you’re looking for people to hang with. There’s a glass house beside the Southern exit to the station at Zuidas, established by my cyclespace colleagues. Come find me and we’ll go find some triple strength beers for the ride back to your quarters. We might even find some cool things on the way:

I don’t suspect you will be any less ignorant, really, if you follow this suggested itinerary. If you’re anything like me, it will take you years to unlearn simplistic dogmas. They were taught to me in the 80s as a student of architecture and I see they’re being taught to budding bicycle urbanists still. But hey, what I’ve suggested beats studying traffic lights, surely.